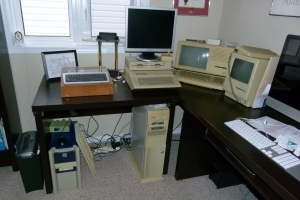 I have a mini-museum at my house and most of the machines are in working order. And they are all setup on my desk with the exception of the RCA Cosmac and the Mac SE/30 which I don’t have room for on my desk. My desk is a large L shaped desk and I have seven computers on it and my printer. I even have room on my desk to setup my laptop when I need it bringing the computer count to 8. I wish I had room for the Cosmac and the SE/30 but I am doing pretty well with what I have.

Here is a list of what I have collected over the years, skipping the more modern systems in the house: