Grandma and Poppa, also known as mom and dad to me or Heather and Murray Rand to most, stayed with us for nearly a week long visit. Grandma had already seen Samantha but this was Poppa’s first opportunity to see her. Matthew was very excited, often too excited, to have his grandparents visiting for so long. We have a few pictures from the visit but somehow Poppa avoided the camera lens. But, with someone else to take some pictures, there is finally a shot of Cynthia and Samantha.

Unfortunately, I couldn’t take any time off of work to spend time with the extended family this past week. But, I got time in the evenings to catch up with my parents. Plus, they have just bought a MacBook Pro and I was helping them set it up and giving them little tutorials on how to use it. Seems like a great little machine and I hope it works out well for them.

During the day, dad kept busy by helping me out with jobs around the house I hadn’t gotten to. He and I framed in a room in the basement this past spring and got most of the drywall up. This summer, I work on the room myself and got it to the point where it was usable. But, the doors needed a coat of paint, the finishing nails in the trim needed to be inset and covered so they wouldn’t be visible and a few other things. He did all of that for me and used up some left over drywall covering up the unfinished side of one of the walls, levelled a spot on the front lawn which had settled, put in a couple of patio stones below my hose bib, and prepared the sailboat for the winter. I am sure I forgot a couple of other jobs he did for me. Also, between these jobs he took Matthew for a few bike rides which he very much enjoyed.

Mom, just like a month ago when she visited, was a great help with Samantha, entertaining Matthew, helping out with meals etc. But more than anything else, we were all very happy to have them here with us before they go south again for the winter.

Which brings us to the other news. Normally, they spend their winters on a sailboat in the Bahamas, as described on their website, www.Windswept-IV.ca. In the summer, they have been working as dock masters at the Killarney Mountain Lodge. However, they have decided that this past summer will be the last time they will do that. This fall, they started seriously looking for a house and it looks like they have found one in Tillsonburg. Next summer, perhaps we will visit them in their new home.

Soon, they will head to Florida and get the boat ready for another season. However, unlike other years, we have some more ways to keep in touch. There is this website for one thing, but we also tried Skype and iChat. Looks like we should be able to video chat from time to time this winter, at least when they are able to find a net connection in the islands. Still, visits like we had this past week can’t be replaced by a video chat. 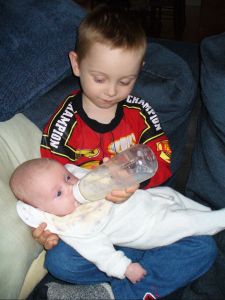 Samantha has been a part of our family for two months now and she and her brother are becoming very close. Matthew loves to help out, as you can see from the photos. What isn’t as easy to see is how Samantha looks at him. If she is upset, Matthew can calm her down. He just sings for her and she immediately turns toward him and watches him. A couple of the pictures show her watching Matthew very closely.

Samantha is holding her head up very well and is very steady. Today, she lifted her head up off of Cynthia’s chest to look at her and held it up for quite some time. At the doctor last week, she weighed 8 pounds 5 ounces so she is still small for her age but growing well.

Matthew enjoys having a sister but you can tell he is looking forward to the day when he can play with her and she does more than just look at him. But, he is busy with school and working on learning numbers and writing at home. And video games. I introduced him to SSX Tricky, a snowboarding game, and loves it. He is asking to learn to snowboard so we may do some research to see if there are lessons for someone as young as he is.

Turns out if you build an Apple ][+ clone in your basement, you can take first prize in your school’s grade 7 and 8 science fair. In retrospect, I (and my dad) assembled a computer from parts but clearly from the look on people’s faces when I showed my project, people thought we had designed it. In the future, I would come to better understand the difference but at the time I was happy to have people think what I had done was somehow very significant.

But, in a way it was. What I had was a computer but no real manuals which came with it. Doug provided us with a Dos 3.3 manual (which is visible in one of the pictures about the construction of the computer) and some photocopies of some other manuals. On the whole though, the machine was undocumented.

He did provide us with a bunch of disks of programs. I would experiment with these programs and figure out how they worked. For example, we had a copy of VisiCalc but no manuals. So, I experimented with it until I understood how it worked. Eventually, I had figured out enough that I helped my dad build a budget spreadsheet for the family.

The other place I was learning was from Nibble magazine. There were other Apple ][ magazines on the rack but Nibble was the only one I really cared about. If I remember correctly, I ended up getting a subscription so I didn’t miss an issue if I didn’t get to the store on time. Nibble was different because it was packed full of useful and interesting programs. They had a one-liner and two-liner contest where people would submit programs which were 1 or 2 lines of BASIC long but did incredible things. In many ways, it was similar to the Obfuscated C Contest because what these programs lacked in readability, they made up for in creativity.

Plus, the magazine had lots of long BASIC and machine code programs. I would type many of these programs in. With machine code programs, it was just a listing of hexadecimal numbers which I would enter into the Apple ][ monitor. Often, my friend Jeff would be over reading the hex numbers to me while I typed away. Often after entering everything and then running it, it wouldn’t work. With machine code, I didn’t really have the skills at the time to do anything except just check the hex digits against the listing. But with BASIC programs, I would start debugging it.

So, from this early stage, I had already learned two key skills which were and still are critical to my work today. First, there is no better way to learn than to experiment with something. Real understanding comes when you see how something works. Secondly, and probably more important for someone interested in software, read other people’s code. For me, I was reading all of the BASIC programs I could find. I would read them to see how they worked. I would read them to see what tricks other people used. And I would read them so I could change them and make them work for me the way I wanted. To develop these skills today, get involved in open source projects. Get the code to a project you are interested in. Figure out how it works. Try changing it. Did it do what you thought it would? If not, why not? Nothing beats getting your hands dirty, especially with someone else’s code.

But, I didn’t just program on this new toy I had. My next story will describe some of the other things I was doing with my Apple ][. 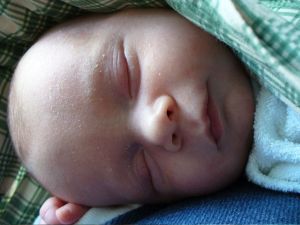 Samantha continues to grow and is doing very well. She had a checkup with the doctor last week and is now up to 7 pounds, 3 ounces. The funny thing is that good friends of ours, Christine and Joe who recently invited us to their place to celebrate their son Quinn’s birthday, just had another baby Wade. Wade arrived at 7 pounds 4 ounces, so Samantha is probably the exact same weight as Wade although she is a month older.

She is still just eating and sleeping of course and we are managing the late night feedings well. We do look forward to the day when she sleeps through the night but that will be a while yet. She is also getting pretty strong and is holding her head up without any problem. We still need to be very careful because she will often just decide to go limp and we have to be ready to catch her head. She’s just trying to keep us on our toes. 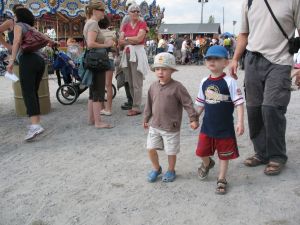 Cynthia and I were worried that Matthew might not make it to the Carp Fair this year. We were both very busy taking care of Samantha. Honestly, I don’t enjoy that kind of thing much and I wasn’t having much luck convincing Cynthia to take him and leave me with Samantha. In the end, Cynthia had an errand to run that day so she couldn’t have taken him anyways.

But, a good friend of Matthew’s across the road, Alex, and his parents offered to take him for the morning. He had a great time.

By just after lunch time, they were getting back from the fair but Alex and Matthew wanted to play more. They stayed at Alex’s house for a while and then a little later came to our place and played in the new toy room in the basement. I invited Louise and Arand, Alex’s parents over for dinner and we made it a full day event. Matthew and Alex had a great time together and get along very well. Matthew is very lucky to have a good friend just a short walk away and I am sure they will continue to be great friends for a long time.