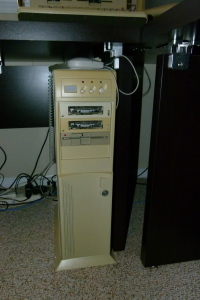 In 1986 when the Apple //GS was announced, I had a homebuilt Apple ][+ clone. Within a few months of the announcement, we had bought a GS. Later, I would be headed to university and we bought a second used //GS which went with me. That //GS is still with me but it doesn’t quite look the same.

When we bought the used GS, it came with lots of upgrades. It had an Applied Engineering PCTransporter which was effectively a PC XT on a card. It had a 5 1/4″ drive for the PCTransporter and two 3.5″ drives which I could use a 800K Apple drives or 720K MSDOS drives depending how I connected them to the computer. It all came with an Apple Imagewriter // and optional sheet feeder which was much better than the old Epson we struggled to use with the first GS. The problem with the Epson was the lack of decent drivers. 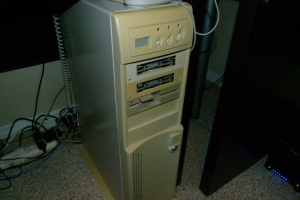 Not much later, I bought other upgrades. I bought a 7MHz Transwarp GS accelerator and an Apple High Speed SCSI card. I bought a 40MB hard drive, external enclosure, cable and the SCSI card for about $900 Canadian. Eventually, I added a second 200M hard drive along with the original 40M. Later on, I picked up the Second Sight VGA card also. And when 14MHz 65816 chips were announced, I bought one and upgraded my Transwarp GS. It runs well at 12.5 MHz.

By the early 90’s, my system was pretty big. Literally, it was big. There was the main system and then the two external hard drives, the 5 1/4″ floppy, the two 3.5″ drives, the printer and all the cables between everything. I started to envy the simplicity of the tower cases my friends had for the 386’s and early 486’s. So, I bought a full tower case and began the work to transplant everything into that. So, my GS is a frankenstein system to this day. I still have the original Apple cases in storage (and they have yellowed badly) but the computer itself is disguised as a PC.

I tended to use AppleWorks GS for my school reports and did a bunch of coding in TML Pascal and Orca/C for my assignments. In first year, we were taught Pascal but by third year, we were expected to know C. So, when I bought Orca/C, I got the “Learn To Program In C” and “Toolbox Programming in C” manuals with the compiler. I worked through all of the lessons in “Learn To Program In C”, and I did. And now I get paid to write C code.

Between 3rd and 4th year, I did an internship at IBM for 16 months. I worked in the RS/6000 Support team and that is where I learned UNIX. Well, IBM’s UNIX anyway. And I discovered GNO/ME for the GS which let me run a UNIX like shell from GS/OS. It even had multitasking! From then on, my machine booted to a GNO login prompt and I could launch the Finder or other graphical apps if I wanted. But more often than not, I was editing my code for my assignments in vi and compiling it using Orca/C.

Even with a 12.5MHz CPU, by my final year of university in 1994-1995 my GS was definitely slow and it did cause some problems. I took a networking course and we had to modify a network simulation program to simulate the behaviour of networks under different conditions. The program did a bunch of floating point and was very slow on my GS. My peers tended to have 486’s and some even had the first Pentium systems. They would run the program and get their results within a minute or two. I would run the program and it would finish hours later. Thankfully, I had GNO so I could run the simulation in the background and still use my computer. But there was no memory protection so it was best to leave it be. If I ran something which crashed, it would take my simulation with it.

In my final year, I was also coding my thesis project from my GS. I was working with two other colleagues to create a “micro-mouse” robot. These are small robots built to solve mazes and there were competitions held to see whose creation could solve the maze the fastest. I was responsible for writing the high level software for solving the maze. The others were working on low level motor and sensor control and the hardware itself. I picked up a VT100 terminal and hooked it up to a serial port on my GS and ran a GNO shell from that. I would have vi open on the VT100 and I would edit my code there. Then, on the console of the GS, I would build the code and execute it. It worked out well even though the robot never came together. The hardware came together too late in the term and the low-level software never really gelled.

In the mid-90’s, I picked up a BeBox and it became my main system. A few years later, I boxed up the GS because I didn’t have room. But before that, I imaged my hard drives and transferred them to my BeOS machine. The transfer was done over a NULL modem cable. I used Proterm on the GS to send the data using zmodem. It was slow but it worked. Once the images were transferred, I used them under an emulator called Sweet16 so I still had my GS handy. Turns out those disk images were a life saver.

Once we moved to a larger place, I got the GS out of storage and by then, the hard drives had failed. Probably stiction prevented them from spinning up properly. If I hadn’t imaged the drives I would have lost my data. I bought a CFFA 3000 which allowed me to put those images onto a compact flash card so my GS boots more or less like it did before. I have removed the SCSI card from the system. The drives are still in the case but they aren’t used any longer. 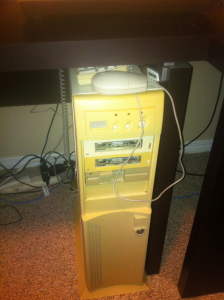 I don’t turn the GS on too much. It really isn’t stable. It often takes a few tries to get it to boot. A common problem with an expanded GS is overloading the power supply. But I am using a pretty heavy duty power supply in the tower case so that isn’t likely the problem. The Second Sight VGA card is known to have problems with power also and there are instructions online for adding an extra power supply line to the card. I should do that update and see if it helps.

The other reason I don’t use it too much is because I don’t have a good way to develop software for the GS. If I want to write some code for the GS, I tend to use the Sweet16 emulator on my iMac. In the emulator, I use vi and Orca/C under GNO/ME. But that isn’t a convenient environment to work in. I would rather do my coding on the iMac itself where I can have a full featured gvim editor and source code management with something like git.

I have done some work on getting a C cross-compiler working for the GS and hope to return to that project again soon. If I get that working, I am pretty sure I would then be motivated to work on some of the hardware issues I have with the machine.

I would like to get an ethernet card for the GS someday. But that doesn’t make sense unless I spend some time to make the existing system more stable.

Also, it would be an upgrade to get the GS back into its original case. The hard drives are dead and I don’t really need the floppy disks hooked up to it any longer either now that I have the CFFA 3000. It would be great to put it back into the original case and put all the drives into storage. I would probably keep one 3.5″ drive connected just in case.

There are some problems with that though. First, I would be back to the stock GS power supply which would be a problem for stability. And I wouldn’t have room for it on my desk. I have room for the tower on the floor but I don’t have desk space for a standard GS case. So, it will probably remain in the ugly PC tower for now.