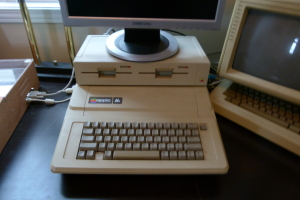 My dad and I built two Apple ][+ clones. One of those two machines was ours and the other we built for my uncle George. He used it to help manage his farm but soon found that it wasn’t enough for his needs and replaced it with an Apple //e. Originally, it was an unenhanced //e but was upgraded to an enhanced //e. He used that machine for many years but ended up in storage.

Later, he offered to me and I kept it in storage for a few years myself. I just didn’t have room in our house in California for all my computers. But, once we moved back to Canada and I had a larger room for my hobby, I got it out of storage. After a bit of cleaning, I had it working well. 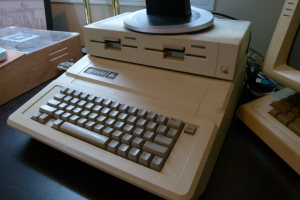 It came with a parallel card and a duo disk controller and the drives which gives me a pair of 5 1/4″ disk drives. Since then, I have upgraded it a bit. I bought a CFFA 3000 which gives me convenient compact flash and USB based storage. And I picked up a super serial card for free at KansasFest 2012. That lets me connect my iMac to the //e through serial. By the time I got that though, I didn’t need it as much since I had the CFFA 3000. 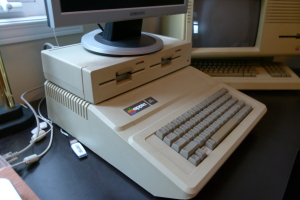 The kids and I often play games on it. We were playing Karateka and Lode Runner recently. I always have the joystick plugged into the //e ready for a quick game.

But I also have done some programming for the //e. I use the cc65 C cross-compiler working on my iMac so I can code for the //e easily. It is a pretty great way to develop for the Apple //. I can write my code on my iMac and have access to great editors, source code management and use a Makefile for builds. When I need to quickly test something, I load my code up on Virtual ][ on my Mac. This is an Apple // emulator so I can run my code and see how it works. And if it doesn’t work, I can single step the machine code easily using the emulator.

And when I am ready, I put my code onto my USB stick and plug it into the CFFA 3000 to load it up on the real Apple //e. This is much easier than developing for the Replica One which requires a slow upload over serial even for quick testing of a small change.

I have use this technique for my tic-tac-toe and CurtaSim programs. But I have no real projects underway right now.

I would really like to get a RamWorks card to upgrade the memory on the Apple //e. That way, I could run a later version of AppleWorks on it and you can never have too much memory. Well, more than 1MB on an Apple //e is probably too much memory.

I wouldn’t say no to a Transwarp or ZipChip accelerator but I don’t really need one. Sometimes I think it would be nice to have a mouse and a mouse interface card but I don’t think I have any software which would use it so why bother.