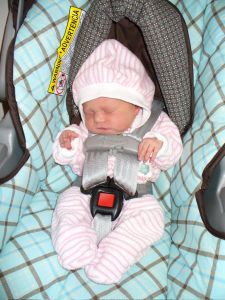 Yesterday, Samantha and Cynthia were both given a clean bill of health and were discharged from the hospital. Matthew was spending the day at his friend Dhruv’s house (thanks Yashi for helping us) and we called him on the way home. We gave him the choice to play with his friend a bit longer or to come home with mom and his new sister. He didn’t think very long about that and soon enough he was in the car with us. So, by early afternoon, we had the whole family back at home. There are some pictures and a video from that experience getting her home.

That almost didn’t happen though. Samantha was still losing weight fairly rapidly yesterday and there were some concerns about that. She had lost over 8% of her birth weight in those three days and the last 12 hours still showed she was dropping. We had a doctor appointment for her the next day (which is now today) so the hospital agreed that as long as she was going to the doctor the next day and she was being weighed, she could go home.

Last night was tough. Samantha would breast feed for a long time (40 minutes or more) and then she would pass out exhausted. I would try to put her to sleep but dressing her and moving her would wake her up. Then, she would just act very hungry again and it would all seem to start over. It was a long night but we got through it and made it to the appointment with the doctor.

There, her weight was shown to be 5 pounds even which meant she had now lost 10% of her birth weight. We had already contacted a lactation consultant and the doctor suggested that we follow up with that and supplement with formula if we have to. The consultant was very good. She showed that Samantha was having to work extra hard for her meal and taught us how to make it easier. Also, she wanted us to supplement with pumped breast milk or formula.

So, that is what we are doing. After the last two feedings, Samantha went to bed just as tired as before. But now, it is clear she is just full and contented, not exhausted. And she is sleeping much better between feedings. We have the long weekend to get through without much support but thankfully it seems we have gotten the help we needed and I think her weight will be improving very soon.