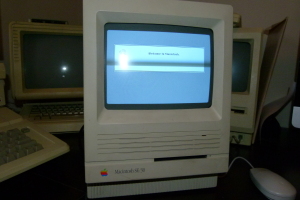 I came into this machine without even looking for it. It came from a friend of a friend who wanted to get rid of it. When it was offered to me, I looked at my desk already full of computers and said no. A few days later, they asked again and I said no again. Then they just showed up with it and it stayed.

The system came without a mouse or keyboard and no disks. I had an ADB keyboard and mouse on my //GS so I hooked those up to it and tried to boot it. It couldn’t find any bootable disk. So, I powered it off for a while. 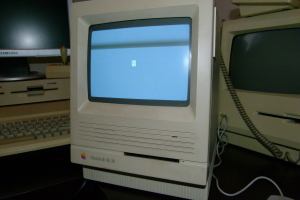 I borrowed a USB floppy disk from work and downloaded copies of System 7.0.1 from Apple and created a bootable disk. With that, I was able to boot the machine. But I still couldn’t detect the internal hard drive which I suspected it should have.

So I opened the case and sure enough, I found an internal SCSI hard drive. I removed the drive and opened the drive itself. These old drives often fail due to stiction. I spun the platter a few times and closed it up and put everything back.

And strangely enough, the system booted to the hard drive after that. The hard drive worked for about an hour or so and then failed again. So, the drive is basically dead but I may be able to resurrect it for a short time if I want.

Since then, I picked up a couple used ADB mice at a surplus computer store. I still don’t have a keyboard for this system so if I want to use it, I need to use the keyboard from my //GS. 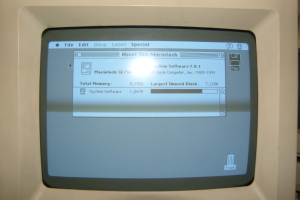 This machine is one of the few which isn’t ready to use. I don’t have room for it on my desk. It lives on top of one of my bookshelves. It probably makes sense to put the Mac 512K on the shelf and put the SE/30 on the desk because it can do everything the 512K can and more. If I were serious about doing that, then it would be great to find a compact flash based storage system to replace the failed hard disk and an ethernet card for the PDS slot. If I had that, I could use this machine as a AppleTalk server for my //GS and even use it to bridge between ethernet and AppleTalk. And I guess it needs its own keyboard also.