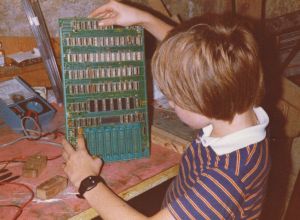 Now that realities of tax, duties and exchange rates had squashed my dream of owning a Timex Sinclair computer, my dad offered an alternative. A good friend of his, Doug Leverton, taught electronics at Fanshawe College but built Apple ][+ clones on the side. He would supply us with all the parts to build an Apple ][+ clone and my dad and I would assemble it.

Visiting Doug’s place one night, I remember he let me play with a completed clone for a while. I played Apple Panic and Apple Adventure. I was completely hooked.

My uncle George was interested in a computer also. So, we obtained the parts to build two computers and started work. When people talk about building computers now, they buy a motherboard, a processor, some RAM, a case and power supply and plug everything together. In 1982, it was different. The motherboard was bare and we soldered components and sockets onto the board, including the 8 slot connectors. All chips were socketed onto the board. We sourced keyboards from a surplus store which used to be part of electric typewriters. These keyboards needed a special interface board to connect them to the Apple motherboard.

The case was custom also. The sides were wood and two pieces of sheet metal were bent into the correct shape for the bottom and the top of the computer. Everything was connected together. We hooked it up to an old black and white TV set using an RF modulator. All we were missing were the ROMs.

We spent an evening at Doug’s house to burn the EEPROMs. We started with the official Apple ][+ ROMs and changed exactly 8 bytes. We changed the “APPLE ][” string which appeared when the machine boots with a “<RAND X>” string. So, yes, the ROMs were copied from Apple but to me, it didn’t seem wrong at the time.

With the newly burnt ROMs installed, we turned the computers on, one at a time and heard the satisfying “beep” and the whir of the disk drive. My dad and I had successfully built two computers.

When I was young, we spent our weekends in Port Stanley sailing. We would travel back to our home in St. Thomas but often we would stop at a small grocery store called “Gifford’s” to pick up whatever supplies we might need. While there, I would often check out the latest issue of Popular Science and often buy it to read interesting articles about technology.

One day, in the fall of 1982, I looked at the magazine rack and saw a headline which read World’s First $100 Computer. I instantly bought that issue and read the article. I knew I had to buy this computer. I had about $100 Canadian in my bank account and started talking to my mom and dad about using it to buy the Timex Sinclair 1000.

It was a tiny thing which came with 2K of memory (which didn’t mean anything to me at the time but 2048 seemed like a pretty big number to me) and would hook up to our TV just like our Atari 2600. But, I was about to learn about exchange rates, import duties and taxes. After talking to my parents, it was clear that the money in my bank account wasn’t going to be enough to buy this machine.

But, my dad had a better idea…

When Samantha arrived early, my time off work started early also. So, I started my time off on August 28th. The original plan was to go back to work on September 17th. But, Samantha arrived early and the plan didn’t quite work out. I had some more work I needed to do before a September 15th deadline. Instead, I worked during some afternoons and evenings during the week of the 10th. On the 13th and 14th, I went in during the afternoon while Matthew was away at school.

But, this past week I have been back at work full-time. More or less anyways. It has been a bit difficult getting up in the morning because of the late night feedings so I have been rolling in around 10:00. Next week I will do better, hopefully…

Cynthia is managing fine during the day though while I am away at work. But everything has kept us all very busy, as my lateness in getting all of this content online shows. 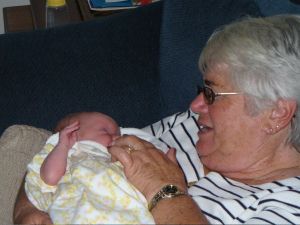 We had a visitor and a bunch of help for a few days early this month. For five days, Grandma Heather was staying with us. She helped us out a bunch, feeding Samantha, playing with Matthew, cooking some meals, helping clean up and lots more. By coincidence, my brother Steve and his friend Katherine had proposed a visit for September 4 or 5th. We suggested later rather than earlier because Samatha was expected to arrive less than a week before. So, Steve proposed visiting Ottawa after seeing our parents in Killarney.

Seeing the opportunity, my mother hitched a ride with Steve and Katherine from Killarney. That evening, we all visited for several hours. It was great to catch up and meet Katherine. Matthew was excited because Steve, Grandma Heather and Poppa and a good friend, Jeff had brought him a special gift. It was a RoboReptile and after a couple of weeks, he is still completely taken by it.

The next day, Steve and Katherine were planning to see some sites around Ottawa and head on. But mom stayed with us and was very helpful. Something tells me she got something out of it also, getting to see her grandson and her new granddaughter. Thanks mom!

We have some pictures from the visit online also. 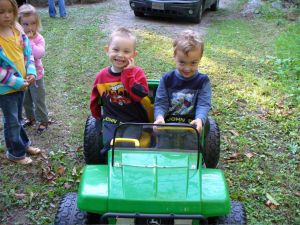 Matthew’s friend Quinn had his 4th birthday party on Sunday September 9th. All four of us, Jeremy, Cynthia, Matthew and Samantha attended. This also marked Samantha’s first real appearance in public outside our home. Matthew had a great time. Christine and Joe (Quinn’s parents) had some animals from a local petting zoo brought in and Matthew enjoyed touching the animals. He rode on a horse briefly also which was a first for him. Oddly enough, Matthew rode on an elephant before he rode on a horse. The elephant ride occurred during a visit to the circus with his “Jumping Jack” grandma (grandma Serena).

There are some pictures from the event are here. 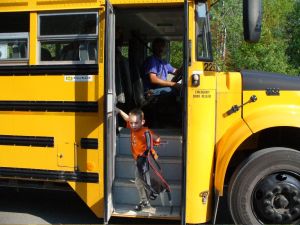 Matthew started senior kindergarten about two weeks ago now, on Thursday September 6th. He was quite excited to be heading back to school and seems to be enjoying himself, even more than he did junior kindergarten. That first day was with a small subset of his class and then the following Monday, the entire class was present. So, he has had two weeks now of school and is having a good time. Unlike last year, he also seems to be more interested in doing crafts. We will have to make more room on the fridge.

Here are some pictures of Matthew getting on the bus and arriving hom on his first day. 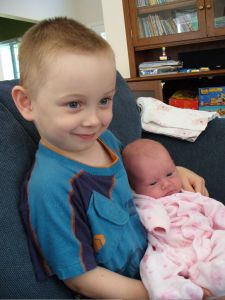 We have some good news. After one week, Samantha had reached 5 pounds 11 ounces. So, she recovered back to her birth weight and then some. Also, she gained 11 onces over the Labour Day Weekend. The doctor and ourselves are no longer concerned about her weight.

The family is adjusting well to the new arrival. As the new pictures show, Matthew is very excited to have a baby sister and Cynthia and I are a bit tired but doing fine.