It seemed to have everything I wanted in a new computer. The CPU was a 16-bit version of the 6502, a 65816. It was clocked at 2.8 MHz versus the 1 MHz of the Apple ][+ I had (note that as I write this, 2.8 GHz machines and faster are common). It came with 256Kb of memory versus the 64Kb I had. And, it had a mouse, detached keyboard, 3.5″ floppy drives (external) and an RGB monitor. But best of all, it had much better graphics and sound. The graphics modes were 320×200 with 16 colours or 640×200 with 4 colours so it wasn’t necessarily competitive with the Atari ST or the Amiga but it was a huge step forward from my Apple ][+. The sound though was probably better than anything on the market at the time with a real music synthesizer chip capable of 16 stereo voices. Add in a Mac-like interface and it seemed like the perfect machine.

That winter I started reading everything I could about it. I bought lots of magazines and as usual, Nibble seemed to have the best technical coverage. I also bought a book from Apple called “Technical Introduction to the Apple //GS” and read it multiple times. I had to have this machine.

At the time, the cost of an Apple computer in Canada was far more than buying it in the US and bringing it across the border, paying all the duties even with the exchange rate. As we did every summer, we vacationed on our sailboat in western Lake Erie so we made a quick stop in Sandusky, OH and visited a local Apple dealer. They had a few Apple //GS’s on display and I went right to one. We tried a few applications but the ones we liked best were Bard’s Tale and Instant Music. So, along with those two software packages, we bought an Apple //GS, an external 3.5″ floppy drive, an RGB monitor and a 256K RAM card to bring the total memory to 512K. Our existing pair of 5.25″ floppy drives would work with it so we would re-use those from the old Apple ][+.

Then, I waited until we got home to actually set it up and try out my new computer. It was a long wait but eventually, I got my chance to try it out. I unpacked the boxes and started setting everything up. I opened the computer to add the RAM card and to plug in the interface card for the 5.25″ floppies but found the inside empty. Well, it did have a power supply but there was nothing else. There was no motherboard in the case. I grabbed the receipt and we called the store in Sandusky and told them what happened.

Apparently they had swapped the motherboard to fix someone else’s system who was having a problem and sold us the empty case! Thankfully, they agreed to send us a motherboard by courier. When the courier got to the border, he was having problems bringing it across because they insisted on duties being applied to the value of the part. After getting copies of receipts and documents showing we already paid the duties, and he was allowed to proceed. But it began to seem like someone didn’t want me to have a new computer.

When the motherboard arrived, I installed it in the case, plugged in the power supply and finished setting up the system. Shortly thereafter I had the familiar, reassuring beep to tell me everything was fine and my new computer was working. Many hours playing Bard’s Tale and making strange music with Instant Music ensued.

In the glow of this new computer, the old Apple ][+ clone which my dad and I built started to gather dust. We could still use Visicalc and all our old Apple // software on the new system so it very quickly replaced it. A friend of ours was looking for another Apple and without thinking too long, we sold it to him. A few years later, my dad and I realized we had let go something which was actually quite valuable to us. Compared to the new system, it just didn’t seem worth keeping at the time. But to this day, I would love to have it on my desk next to my current computer(s). It really was a one of a kind. We did go back to the man who bought it from us but he had scrapped it long before. The “Rand X” was gone.

But, I did have this fancy new computer which did do a whole lot more and I really wanted to write programs for it. But Applesoft Basic didn’t seem to be the way to do it anymore. 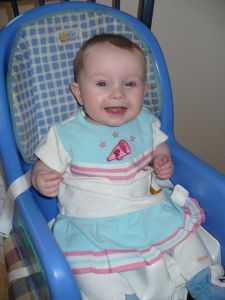 Samantha is starting to change more quickly. She is sitting now. You have to put her in a sitting position but once she is there, she balances very well and reaches for things and only rarely falls over. She rolls over onto her stomach all of the time and is definitely close to crawling. Samantha will pick her body up and be in a four point position and then rock a bit. Then, she will go back onto her stomach, lift up her arms and legs and flail for a little while. Then, back up on all fours. She will figure it out soon I am sure.

But still, she is pushing herself backwards with her arms. Of course, she is looking at something in front of her and trying to go in that direction so she ends up pretty frustrated when it ends up farther away. But, if you look away for a moment, she will have moved some distance when you look back.

The latest thing she is doing is clearly saying “ba” over and over. Just a couple of days ago, Samantha and Matthew were saying “ba ba” to each other back and forth. Cynthia and I looked at each other knowing that before we know it, we will have another voice in the house and the volume will be that much louder. 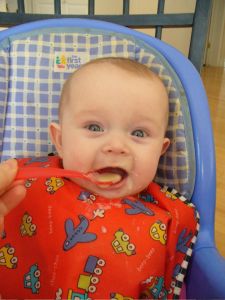 I have been delinquent in updating the website so this isn’t exactly news because it happened two months ago now. But, Samantha had her first real meal and we have the pictures to prove it. As you can see, she did fine and only had a bit on her face. Of course, since then we have had some messier meals.

Now she is up to having three meals a day. She is eating cereals like rice, barley and oatmeal with a bit of something else mixed in like peas or sweet potatoes. But what she really likes are the rice cookies afterwards. She gets to feed those to herself and she sucks on them until they disappear.

Still no sign of teeth but they should be starting to arrive soon.