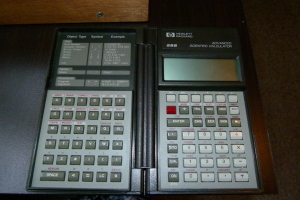 The HP 28S calculator was the first real portable “computer” I owned. I bought one early in my second year of university and within a couple of weeks, I was awarded a scholarship whose prize was a HP 28S calculator. I sold the second calculator to a fellow student. But this wasn’t an ordinary calculator and I needed to learn how to use it.

For one thing, the calculator used “reverse Polish notation”. What that meant is that if you wanted to multiply two numbers, you would type the first, press enter, type the second number and press multiply. The calculator would multiply the most recently entered numbers and return the result onto is “stack”. 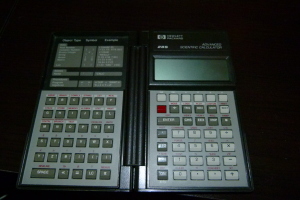 It didn’t do just simple arithmetic. It handled complex numbers, vectors and matrices. You could enter an equation and ask it to solve for one of the variables. Or maybe plot the expression or get its derivative. You could even write your own programs for it. Years ago, I wrote a program to draw the Mandelbrot set.

These days, I mostly use the calculator as a reference implementation for my iOS app, Halcyon Calc. When Apple announced the upcoming opening of the App Store, I knew I wanted to write something. I had bought a first generation iPod Touch and wasn’t sure what I wanted to create. Then, I saw my HP 28S on my desk and realized what I really wanted was a 28S which I could take with me wherever I went. The iPod Touch was smaller and thinner and much more powerful.

So, I try not to use it too much so I don’t wear out its batteries (it takes N cell batteries which are not easy to find). Generally, I turn it on to see how it behaves when I am adding more functionality to my app.