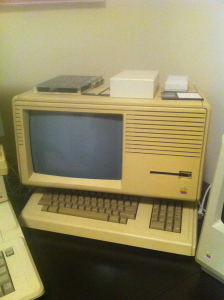 I bought my Lisa from eBay shortly after moving back to Ottawa. I was browsing eBay and saw there was a Lisa 2 for sale in Ottawa. This is a very big and heavy old computer so bidding on a local listing gave me a distinct advantage. Unlike most other people, I didn’t have to pay for shipping so I got it at a discount.

The system itself did not come with a keyboard or mouse. But it did power up and try to boot. Like most of these old Lisa’s, the widget hard drive seems to be dead. The 3.5″ drive also seemed to have failed. I started looking for parts to bring this system back to life.

I bought a mouse on eBay. The mouse is actually from an old Mac and not the original Lisa mouse which are more difficult to find. But it worked just fine on the Lisa. 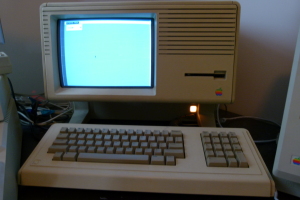 I also found a keyboard in another eBay listing. It was sold “as-is” and when it arrived, I found it didn’t work. That wasn’t too surprised that the keyboard didn’t work. The Lisa keyboard is strange because each key has a bit of foam inside of it which breaks down over the years. I opened up the keyboard and found that the foam had turned to dust. After some searching, I sourced all the materials I needed to repair the keyboard. I bought foam with the right thickness. Also I found a hole punch with the right diameter. I made a sandwich of foam with double sided tape on either side so I could attach the plastic backing and the foil and used the punch to create my new foam inserts. After punching out nearly 100 of these little pieces and inserting them into the keyboard, everything seemed to work just fine. I had repaired the keyboard.

The 3.5″ drive had seized up. The mechanism for inserting and ejecting a disk needed to have the original grease cleaned off. I used some WD40 to remove the old grease and some lithium grease as a replacement. After working the grease in through a series of disk insertions and ejections, the drive was working like new. 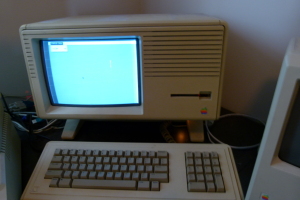 The big problem was the hard drive. After a bunch of research, it seemed like repairing the widget drive was probably not worth my time. These drives were unreliable 30 years ago when they were new. It likely would never work again so I removed it from the Lisa and it sits on my shelf where I can show people what a 10M hard drive used to look like.

Instead, I bought the parts to build a IDEFile. This board allows you to connect a standard IDE hard drive to a Lisa. I also had to order a bunch of other components online and got my soldering iron out. I started to configure my drive so I could connect it to the Lisa. I built a custom serial cable so I could control the IDEFile from my Mac. I connected the drive and using the menu on the IDEFile, I instructed it to format the drive. Everything looked good so it was time to hook it to the Lisa.

I was going through the steps to try to get the Lisa to install the system software to the drive and trying to get it to recognize that it was there. But I suddenly couldn’t communicate with the IDEFile any longer over serial on my Mac. I disconnected everything and went back to basics. I tested the +5 and ground pins and found some bad ground connections on a couple of sockets. I fixed the solder joints and started to bring the board up again. Serial communication was fine so I added the memory chips and tried to boot the IDEFile itself. It failed the RAM test.

Since then, I have checked and re-checked connectivity of my board against the schematic for everything which may affect the RAM test. It all seems OK. My plan is to take the board into work sometime where there are oscilloscopes and logic analyzers I can use to try to diagnose the problem. Once this board works, I should have a working Lisa which would be great.

Until I can get the basic system working, I can’t do too much with it. Mainly, I just want to see the Lisa Office environment. I know what the original Mac UI is like and have read about how the Lisa was different but I want to see it in person.

I do have five 3.5″ disks labelled “Pascal” for the Lisa so perhaps I have a development environment for this system also. I haven’t written any Pascal code in a very long time but I would be tempted to write something once the computer was working just to see what it is like.