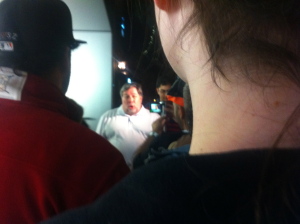 I happened to be in Mountain View, CA for a short time on a business trip during the launch of the iPhone 4S. It was later in the day and I was thinking of leaving the office to get some dinner. Before I left though, I checked my news feeds to see if anything interesting was happening. That is when I read this article.

Steve Wozniak, the creator of the Apple // and one of the founders of Apple was in line to buy an iPhone 4S at the Los Gatos Apple Store. That was only about a 20 minute drive from where I was. This was my chance to meet someone who had seriously influenced the direction of my life.

I recently finished building my Replica One which is a replica of one of Woz’s first computer designs, the Apple 1. I grabbed a copy of a schematic of the Apple 1 and printed it out before leaving the office. My plan was to see if I could get him to sign it for me.

Once I arrived, I found Woz surrounded by a dozen or so people. And true to form, he seemed to be spending most of his time talking to the kids who were asking him what they should do be an engineer and build cool things. He gave great advice and I wish I recorded some video of what he was saying. I used my phone to get some pictures of him but it was tough with the low light and the crowds. Only two pictures ended up almost reasonable.

After he talked to a bunch of the kids, someone asked him for a picture and then another person on the crowd asked for him to sign something. I had my schematic, an iPad 2 which I was going to use as a surface for him to sign on and my pen in my hand. After a couple more people got their pictures or something signed, I got his attention and asked him to sign my document. I passed him the iPad 2 and schematic but he had a pen ready to go.

After starting to sign, his eyes focused more on what he was signing and he said “Hey, this is my design!”. I said it was significant to me because I had just assembled a Replica One and I planned to put the signed document next to my little piece of computer history. He said he loved the Replica One and thought it was great that some people still put systems together like they did back then with a soldering iron.

He finished signing the schematic and passed it back to me. I thanked him and probably had a crazy grin on my face and he went on to posing for more pictures or signing anything people brought to him.

Once I got home, we bought a frame for the signed schematic and it sits right now next to my Replica One and it reminds me often of the chance I had to meet Woz.