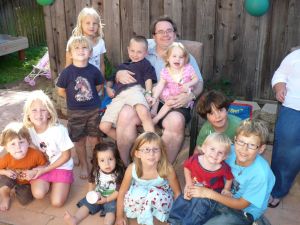 Samantha turned two late in August. On her birthday, we celebrated at home. After a bath, Samantha opened her presents. We gave her a toy laptop which she loved and you can see her playing with it in the pictures. It was a quiet birthday celebration but we had bigger plans for later.

We invited many friends to come join us to celebrate Samantha’s second birthday. We rented a “jump house” for the kids and there was always one or two and often many bouncing in there throughout the day. I bought a case of Canadian, partly to enjoy a beer from home but also to introduce people to Canadian beer but not many took advantage of the opportunity. So, I had Canadian beer in the fridge for a couple of weeks after the party.

I baked a cake and Cynthia decorated it. I did some calculations to estimate the carbohydrate count of the cake because Samantha was going to get to enjoy eating some chocolate cake on her birthday. After opening presents earlier, Samantha was very excited to open more and I was hard pressed to keep up with her.

Later in the evening, some families left but others stayed and we had a BBQ and some more dessert before they came to dismantle the jump house. It was getting late and Samantha was very tired. So, soon after that we said our good-byes and Samantha’s second birthday party was over.

Thanks everyone for your gifts and birthday wishes.