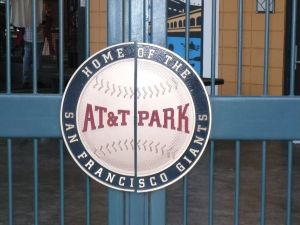 We were offered the opportunity to attend a Juvenile Diabetes Research Foundation event at AT&T stadium and see a Giants game. After my experience with WWDC, I convinced Cynthia that the way to get downtown was by train. It brought us within a couple blocks of the stadium. Before the game, we were provided with a BBQ dinner. The kids spent much of their time in a jump house.

Then it was time to watch the game. It was getting pretty cold so we got a couple of hot chocolates to keep us going. Honestly, I can’t tell you who was playing and I probably only watched a few plays. Such is life with a two year old. After a few innings, it was time to catch a return train. We didn’t get home until about 10:00. Matthew and Samantha were exhausted (to say nothing of Cynthia and I). I don’t know if there is still a baseball team in Ottawa and it was a great opportunity to see a major league team play before we moved back.