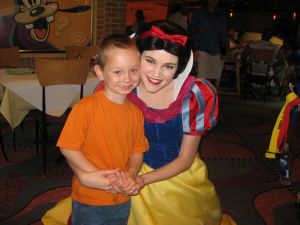 Aunt Ali was going to be at Disneyland for a conference for a week in August and she suggested that we join her for the weekend. So, we piled into the car late in the afternoon on Friday and drove south. After a long drive, we arrived late in the evening but in time to enjoy the fireworks that night. We spent the next two days at the park and Matthew and Samantha loved it.

We had breakfast at Goofy’s Kitchen Saturday morning. There, many characters came to our table but Snow White and Belle were the highlight, especially for Matthew. After breakfast, we went to the park and went from one ride to the next. By noon, it was time for Samantha to have a nap so she and I went back to the hotel room where I took advantage of the time to catch some sleep myself. Cynthia, Aunt Ali and Matthew remained in the park and went on the It’s A Small World Ride (by the way, to our readers you will appreciate that I did not post the 10 minutes of video of that ride) and a Toy Story ride.

But, for Matthew the thing he will remember the most was a Jedi training area. There, they dressed as Jedi and practiced moves with a toy light sabre. After some training, Darth Vader and Darth Maul arrived and each had the opportunity to battle one of these characters. I have put together a special movie from the video clips Cynthia took that day which you can see here.

After her nap, Samantha and I rejoined everyone. We went on the Pirates of the Caribbean ride which Samantha found too scary but Matthew enjoyed. Afterwards, we ate in the New Orleans area which was pretty good. Then, we went looking for rides more appropriate for Samantha before we called it a day.

On the way back to the hotel, we walked past a band and Samantha insisted we stop so she could dance. She picks up her skirt and then bounces and spins around. Check out the video to see her dancing.

I don’t think we watched the fireworks that night since everyone was exhausted. The next morning, Aunt Ali got up early to catch her flight home. We packed up the car and checked out of the hotel but planned to spend the day in the park and head home late Sunday. So, we went to California Adventure the next day. There, we saw even more characters, especially while having lunch at Ariel’s Grotto. The character which was the biggest hit though was Sully from Monsters Inc. Leading up to our trip, we made it a point to watch Disney movies with Samantha to introduce her to some of the characters she would be seeing so she wouldn’t be scared. She loves Monsters Inc. and when she saw Sully walk by, Cynthia had to run after her as she chased the monster.

After another long day, we got into the car later than planned. I think we were on the road around 9:00 PM and I didn’t pull into the driveway until just after 2:00 AM. The next day was a bit rough for me at work but the kids loved it. Thanks Alison!