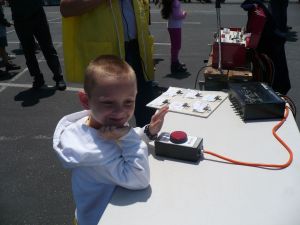 At the end of May after returning from Ontario, we spent a day at Maker Faire. Maker Faire is an event which celebrates people who build useful, cool or strange things and encourages everyone to become a producer and not just a consumer. One of the first things we saw when we got there was a rocket kit. The deal was for just a few dollars, you got a rocket kit that you assemble at there and then take to another part of the faire where they would launch it. So, Matthew and I got a kit and started putting it together. Checkout the video and read more to hear more about our visit to Maker Faire and see some photos.

Matthew did most of the assembly of the rocket and decorated it before we walked quickly to the launch area. There we found a short line where we could watch a few launches before Matthew’s turn. First, we gave the rocket to someone to inspect it to make sure everything was OK and then he installed the rocket engine and the igniter. Then, we took the rocket to the launch area where they had many pads. The setup a rocket on each pad and brought forward the rocket builder to do a countdown and press the button if they wanted to. Of course, Matthew did his countdown and launched his rocket. Years ago, I did some model rocketry and it was a great place to introduce this to Matthew. He is still too young for the hobby but maybe in the future he will pick it up.

After that, we wandered through the faire, gawking at the cool and crazy exhibits. I think the next highlight was a building which had lots of different robots. Matthew had the opportunity to control one of the robots and that is on the video also. Also, there was a huge Lego exhibit and an area to build your own Lego creations.

We will definitely be attending Maker Faire next year.